Celebration: Around the World in 29 years


40,055 kilometres / 24,889 miles. The first time yours truly ran into Ms Bettina Thomsen was at the Elfsborg March in Gothenburg, June 2011. Since then we have met each other on the road several times.

Now she deserves special attention and celebration. On Wednesday 15 August 2012, she reached the magic number of 40,055. That's the number of kilometres around the globe at the Equator, equaling 24,889 miles. On Monday 20 August, she was awarded the Danish Athletic Federation's beautiful Around the World Medal in acknowledgement of her extraordinary feat - which took her 29 years.

In comparison, your writing Beagle Boy / Bear Bandit has only walked 6,203 km of official marches since 1998; and I have recorded less than 3,000 km of training (see overview here). So I'm pushing ten thousand clicks, but there is still a very long way indeed to 40,055 kilometres.

HUGE RESPECT and congratulations to Bettina. 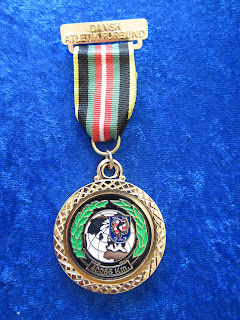