Column: The War Vet at Guldregn 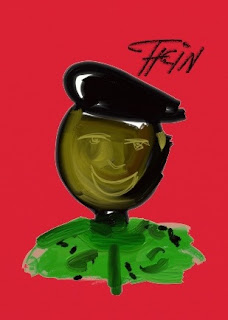 I had a strange experience at Cafe Guldregn - a night bar with dice playing, cheap beer and enough smoke for a bastard sword to cut - one very late Saturday night in May last year.

Talking to some birds. A young man whom they know a bit joins. A girl tells me that the new arrival has been to Afghanistan. OK, I use a lull in his conversation with one of the girls to greet him and tell him that I was in Astan as well. He looks at me with a hard-to-interpret expression; asks me if I were with the Guard Hussars? No, I was someplace called Ghor, north of Helmand, and it was my second tour. And what did he do, where was he? He now squirms a bit and when his conversation partner says something, he abruptly breaks off contact with me, totally.

I sit a bit baffled. I mean, one vet to another, right? I mention my surprise to the girl from before. She informs me that, well, Mr NN "doesn't like to talk about it much". Hmm. Again, one vet to another, about the most basic stuff? That's a first. But what does SHE know about what this enigmatic, overly well-groomed guy did? She didn't know the details, but she was positive about the rank: "He is a warrant officer!" ["seniorsergent" in Danish]

Right ... this bloke was like 25 years old or something. Warrant officer, my arse. And by this I don't mean that my arse is a warrant officer; I mean that this joker walks around telling girls that he's a war vet to impress them with his "mysterious, silent man" act!!! lolz, that's just funny. First time I've heard about this in Denmark.

Ah, but the strange things you experience in the smoke, noise and debauchery in Copenhagen bars at night.

Blog readers: I wrote this text as a Facebook note in May 2011. Stumbled upon it today and felt that it was worthy of a quick posting here on the BB page.