Note: I know this is a long article, but hey, read it anyway - it's one of the better ones. Comments are welcome. And remember: click on pictures for larger versions.

Dear readers, the webmaster grabs the occasion of 2012 being around the corner to do a status on 2011. The marching team changed its name, got a transfusion of young-blood members, and tried their feet with both well-known as well as wholly new marching challenges. This year was also one of remembering the ones we lost on the field of battle.

A year with a lot of Beagle Boys marching is drawing to an end. From from my personal perspective the string of official events started with a DANCON March in Afghanistan in early January and ended with Moesgaardvandring, Århus, in November. Two loosely scheduled marches in December were no shows because of an extreme hangover and time constraints, respectively. 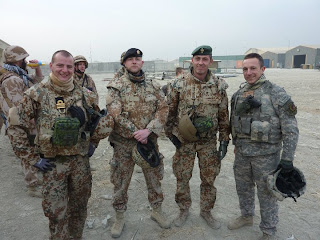 Left: The author of this article was lucky enough to be in transit in Kabul International Airport just when the Kabul DANCON March was being conducted in January 2011. Here I am with two Danish and an American friend prior to the start. The DANCON March of my own unit took place in October 2010 and you can read an English language photo report here.