For those who do not already know, a friend of mine from across the Atlantic did a very tough endurance run in memory of Jørgen Randrup. 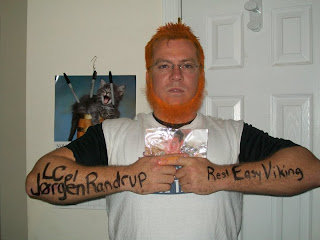 Right: Mr James Armstrong is an American viking who most generously shipped so-called care packages to my Danish colleagues and me during my deployment of 2010-2011, even though James and I have not (yet) met each other in real life. Follow this link to see him struggling in honour of Lance Corporal Jørgen Randrup, or just notice the picture he is holding and the text on his arms before the run.

I think it is worth spreading the word of how the death of this fine soldier made an impact far from his own country. Another person who made a great and positive impact on the lives of a large number of people is the man who made our marching team change its name.

Changing the name: one man down, others have joined us
Bjørn Richard Kærgaard "BRK" Jensen tragically died in a traffic accident on this very day two years ago. In another posting this year, we have stated the background for the name "Marchteam Bjørnebanden" / "March Team the Beagle Boys". The idea to change the name is also the indirect reason that the blog you are reading came to life again after a couple of very silent years. There are few more words to say on that matter: Bjørn is remembered by each posting on this blog and every time our little group do a march together, be it just training or an organized event.

Left: An epic pic of the 2009 marching team in Nijmegen, BRK seen to the far left.