During a late night over beers at the Fulda March in Germany this year, Morten, Per Ole and I shared the same sentiment when someone brought it up: we should include more people in our circle. I sincerely believe that this is in the spirit of Bjørn. He was always an extrovert, and he was very enthusiastic about the GEMCEEs (our former denomination) being a group, a unit with their own website putting our mark on the Danish marching subculture.
So that night in Fulda the present ones of the old core of Eritrea veterans decided that we should invite some of the "new guys" to be part of our quite informal group. You can see the names and ugly mugs in the section dedicated to that purpose. Let me move on now, because I do not believe that Bjørn should want me to dwell more on the sad parts of this year, but on life on the road! One of his section colleagues from Eritrea took on a great endeavour, for example.

Solo long-distance tours in Spain and Lithuania
Retired Lance Corporal, now an executive in Statoil, Robert K. Steffensen currently takes a break from all the party-harty march trips of the rest of the team, but that didn't stop him from planting a massive Beagle Boys banner on Spanish soil in the spring of 2011. Spain - the ones a little bit interested in hiking will guess where this is leading. Yup, the ancient pilgrimage route known as El Camino de Santiago. Four weeks, 780 kilometres and wham(!), you have an experience for life. 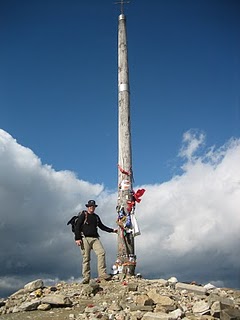 Right: Robert at the highest point of the four-week hike in Spain.


To be honest, most of all this marching hubbub is just that: hubbub, beers, and socialising. Robert turned a new page in the team's history by putting on his rucksack and doing this long hike in solitude, in the company of silent nature and with the privacy that gives room for contemplating one's life and the world in general. There really is a world of difference between that and the throng of 40,000+ marchers crammed together on Dutch roads to the sound of entire towns partying along the route. The present writer has definitively been inspired to undertake El Camino sometime in the future, when the calendar and life's circumstances allow. Quite likely on my own as well. Robert wrote an article about his experience; it's in Danish, but peppered with pictures. Go have a read and a look. Non-Danes are even allowed to use Google Translate. Yes, it's true, go ahead.