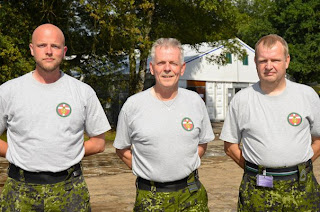 This signature is the Beagle Boy whom has worn his boots the most this year, on the roads, anyway (giving a well-deserved nod to Per Ole's countless combat patrol exercises in his unit), closely followed by Santiago pilgrim Robert. 11 official marches I have done; more individual events for me than ever before in a calendar year, and being equal to around 1,000 kilometres.

2012 will be even crazier than that, though. Like in 2007, a number of not-quite-right-in-their-heads marching fanatics from all over Denmark and elsewhere will train for and conduct the 650 kilometre trip from Copenhagen to Nijmegen, all in 16 days total, followed up by the "normal" 160 kilometres of the Nijmegen Marches. I am part of organizing the time-consuming ordeal and will thus participate for sure. Per Ole wants to, but his duties with the regiment will be the deciding factor in the end. Here's fingers crossed for the schedule and the powers that be to be indulging for POF Daddy. Also it will be interesting to see how matters will progress with the Dutch Armed Forces considering cutting a considerable amount of support for Camp Heumensoord, centre-piece for the military presence at the Nijmegen marches. Here's all fingers and toes crossed that they will find a tolerable comprise. Support the cause by becoming a "fan" of this Facebook page. 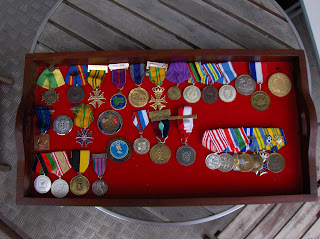 Left: Bling-bling! My finely honed sense for procrastination, the ownership of a professional photo camera, and some cleaning up of the flat had consequences for the blog: my medal and coin collection was elevated from lying in a plastic bag in my Afghan treasure chest to being arranged on the filt board of said chest. A complete overview of the souvenirs earned through a decade+ will follow in the beginning of January.

No matter what, one thing is for sure: if you do some marches yourself in Europe in 2012, it's quite likely that you will run into one or more of us. You be hereby warned!

Finally: happy new year to our increasing amount of readers. Please, if you enjoyed this article or the blog on the whole: spread the word, for example by sharing the link on Facebook. It's extremely satisfying that we have had so many hits since the blog was reinvigorated in August.
See you on the road!