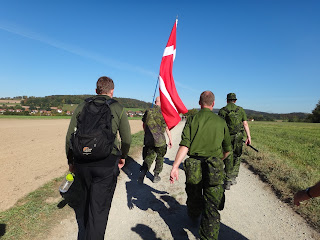 Some of the Boys put centre of gravity on defusing from an everyday life with lots of military sports, others slept a few hours more during the nights and did more kilometres on the Hessian gravel roads. There was also time for befriending people from as faraway places as Taiwan and Korea.


At o'clock "Hey, hey, rock'n'roll, earley in the morning", about a score of Royal Life Guards of all personnel groups convened at Høvelte Barracks in Northern Zealand, Friday 30 September 2011. Bergens were loaded up in the VW mini busses and off we were, set for the state of Hessia in Central Germany. The column was on wheels before the break of dawn, yet it was not arrived until after 9 pm; we hit several of the infamous German staus and thus had plenty of time to refresh ourselves with supplies bought just south of the Danish-German border - as per the standard procurement procedures of Danes entering Germany. 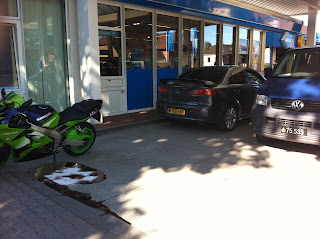 Big drama experienced at a German petrol station. The young, female driver of the pimp car (no, not talking about the blue Army VW!) tried to nudge her vehicle past the Kawasaki to the left. She tripped it. Left her car and went into the shop. POF, Bargøjsen and I looked at each other, then looked at the pool of oil forming underneath the MC, and then ran over and got the bike upright. The employees put some sand on the oil and the woman driver was perplex; the MC owner we never saw.

An international event, new to most of the team
The Fulda Marsch, as it is called in German, is one of the approved marches of the walking association IML, the International Marching League. The IML stamp of approval is a sign of a walk being well organized and with an interesting route. Thus it is a "must do" for many of the dedicated walkers around Europe, yet this was the first time your reporter was to try his feet with Fulda. A few of the guardsmen set for the trip had completed the challenge last year, including Beagle Boys veterans POF Daddy and Bargøjsen, Johnny "Buller" Madsen plus BB newbie (part of the crew for merely two years) Jimmi Hellmann; most of the happy campers this year, though, were first-timers like yours truly. 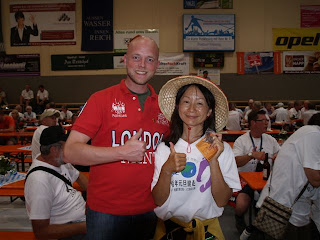 The International Marching League truly is international: here your trusty reporter poses together with Rose from Taiwan. She has taken out a full year of her calendar to do marches, IML and others, all over the world. Awesomely cool, that (photo: Bettina Thomsen).

Hills, you say?
Especially Bargøjsen, who always carry weight with him, bergen or no bergen on his back, and thus has no love for undulating terrain, had persistently tried to infuse a fear of the Hessian hills in me; like most of our party he had opted to sign up for the two times 21 kilometres route "to have a good time". Such softness does not appeal to this signature, so like BBs René Lyholm and Andreas Knudsen, I had naturally still set my eyes on the marathon distance. A decision I in no way regretted. 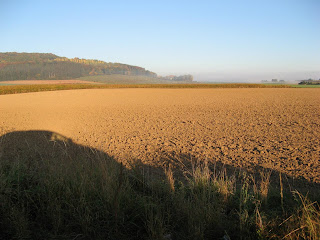 Parts of the route were not exactly flat as a pancake, but still a bit more up and downish than typical Danish terrain. Other parts were really steep. Here is a shot of the first category. Hills or no hills, almost all of each day's walk was characterised by stunning sceneries - a typical thing of most organized marches, and a big part of making this hobby addictive (photo: Markus Buder).


A bar, I say
As mentioned we entered Fulda Sportshalle a lot later than hoped for Friday, but when we had our sleeping bags rolled out on the floor of a crammed gymnasium floor, there was of course no question of changing clothes and hitting the town. That meant firstly doing a walk of three or four kilometres from our quarters. Four clicks it probably was, because POF Daddy and the others having been in town last year turned out to be semi-lousy pathfinders! In the end, though, we found a home in the smoke-filled Sonne Tag- und Nachtcafé. The eyes of the sparse local clientele turned round as saucers when 20 soldiers, many of us in shirt and tie uniform with medal ribbons donned and a cocky attitude, entered the room.

The mood was good, and as the night went on, more and more Fulda citizens joined what ended up being a right crowd. Some Danes stayed late. Very late. I was not one of them, figuring that 42 kilometres on a hilly route probably called for at least three hours of sleep before. And that was just what I got. 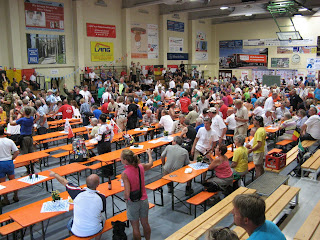 Our quarters were in the same building as this handball court turned eating area, so we did not have far to go for our breakfast (photo: Markus Buder).

Early risers and not so early risers
Andreas did not get that "much" sleep. He wasn't sure, but according to himself, he had more or less only zipped up his sleeping bag before I proceeded to wake him Saturday morning; a promise he had had me make sometime during the night, because he knew that he would party hard, but still do the marathon. He was very persistent, telling me to club him to life were he too far away. I made good on my promise, and alas, there was nearly no joy in using my improvised banner pole - a fishing rod - to give him a good beating all over the sleeping bag. Nearly no joy, hehe. But arise he did, mission accomplished. 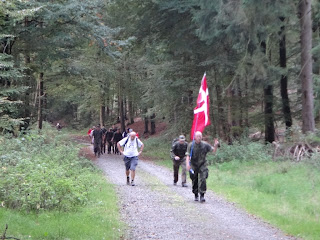 Yes, there were hills, actually. This pic is from Sunday, where I felt like just grinding on and sweat out the hangover, and thus walked on my own until the 15 kilometeres resting area. There I joined René, who'd had a head start (photo: Rose Huang).

42 clicks, port, and schnitzel
Saturday went in good order, with lovely views of a landscape kept in autumn's colour explosion of red, green, orange, and variants of earth brown. A crystal-clear, blue sky. Fields of black soil and its musty smell. The cool tint of autumn air in our lungs and the warm rays of the sun our skin. Refreshing shade in vast, silent forests, where the only sound was a gentle breeze through the evergreen treetops, the fluttering of my banner, and the crunch of our boots against the gravel path.  It was, in a word, beautiful.

The sound of wind and footsteps wasn't all we heard, though: we had good, chatty fun in our little group. Also, Thyregod has the agreeable habit of always bringing with him on marches a bottle of the The Royal Life Guards' Port, a burden in his bergen that we did our best to relieve him from. There was a crisis at one point: towards the end of the route we were appalled that no bierstubes or restaurants were open in the small towns we passed through. Too early in the day, the proprietors said out of windows, but that's bad business; 4,000 people were out on the roads and probably many of them thirsty for a cold, German beer in the indian summer heat. In the end we spotted a döner kebab/cold beers fusion pizzeria on a side road. They served tolerable schnitzels and solid quality beer, so we were happy. It seemed we also saved the day of the proprietors; they wanted group photos with them and their uniformed surprise guests, and we modestly obliged. 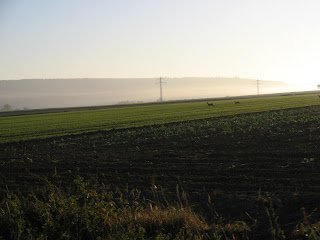 Deer on the run across a field in the morning (photo: Markus Buder).

In the goal area we met the 21 kilometres guys; they'd enjoyed the day as well, albeit in a more relaxed manner, if you can talk about relaxed when walking 21 kilometres. They seemed to have had a very good time, including going for a dip in a stream!

Another night out, out on the roads again next morning
Not much to say about the second night, since it, and Sunday morning, was close to a carbon copy of the events before. During Sunday, René and I took the lead of the rest of the band of "42 clicks brothers"; I felt like a bit of being on my own and walking fast to clear the system after two nights of partying and three hours sleep each; René had trouble with his knee when it cooled down. Therefore we ploughed on with practically no breaks, ending up with an average speed of 6,2 km/h (including breaks) for what turned out to be a 45 kilometre route of the day. Fair effort, considering that we again encountered baking sun and hilly roads. 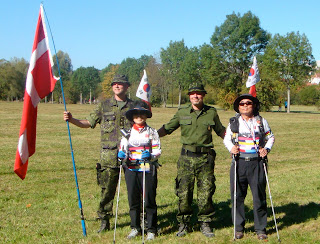 At the end of Sunday's stretch, René and I met this couple from Korea. You might think that they reside in Europe, but think again: like Rose from Taiwan, Mr Kim and his wife live in their native country, but travel around the globe to see the world on foot.

The Fulda March was a nice experience for the Beagle Boys representatives, and I personally won't rule out doing the walk again. But let's see, there are so many interesting locations the BBs haven't visited and rambled through yet.

Thank you for reading; I hope the pictures made it bearable making it through the many words. Below there are more pics.

All pictures below stolen from a public album on Facebook, courtesy of photographer Markus Buder. Used without permission. Links to the complete albums on Facebook: Friday, Saturday, Sunday.