Video clip: on board a Danish, world-class warship


Video clip: on board a Danish, world-class warship

CNN has visited ”one of the world's most advanced warships”: F-361 IVER HUITFELDT, a frigate which currently conducts anti piracy operations close to the coast of Somalia. Watch the video here and read more.

Info pieced together by Thorbjørn Hein

This video clip has circulated amongst Danes on Facebook today, but I think it deserves a little background info for my international friends.


Check it here, then read more if you’re interested!

The Iver Huitfeldt class is a three-ship class of frigates which started entering service with the Royal Danish Navy in 2012.

The frigate is a direct evolution of the Absalon class. Based on the same hull, the frigates are much more powerful  – Absalons have two 8,200 kW MTU diesels, the frigates have four such engines.  Frigates also have a lower profile (having dispensed with the Absalon's internal vehicle deck). By reusing the basic hull design of the Absalon class the Royal Danish Navy has been able to construct the Iver Huitfeldt class considerably cheaper than comparable ships.

While the Absalon class ships are primarily designed for command and support roles, with a large ro-ro (roll-on, roll-off) deck, the three new Iver Huitfeldt frigates are equipped for an air defence role with Standard Missiles, and the potential to use Tomahawk cruise missiles, a first for the Danish Navy.

In 2012-2013 Denmark contributes with IVER HUITFELDT in NATO's anti piracy Operation OCEAN SHIELD. The air defence ship can operate in most of the world. 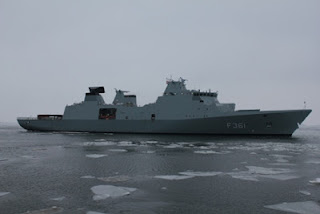 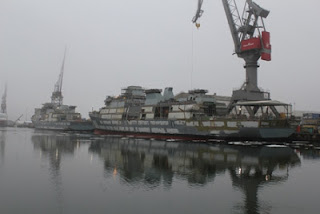 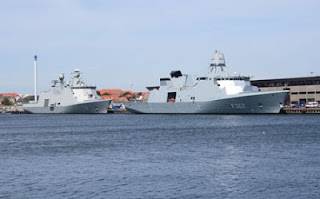