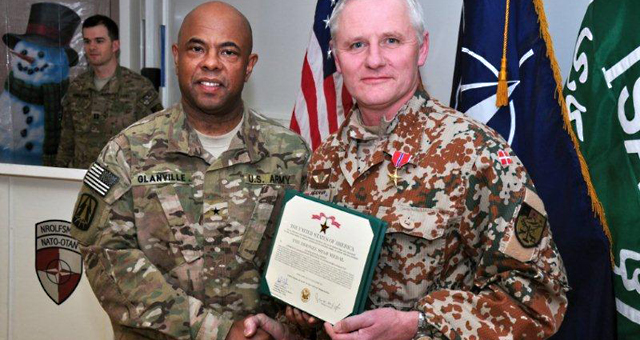 AFGHANISTAN, Kabul: For his work on the Afghan Constitution, Colonel René Andersen has received the American Bronze Star - the fourth most prestigious honourary medal of the US Army.

- It was a big surprise. I wasn't even aware that it is awarded to foreign personnel, says Colonel René Andersen about the respected, American medal.

The medal was presented to the colonel when his deployment of nine months in Kabul was at an end in December 2012. In Kabul he has worked together with the Americans, acting as second-in-command in the section to do with the implementation of the Afghan Constitution.

- It has been exciting to be able to introduce a new constitution in Afghanistan, says the colonel, who also has a master's degree in law.

One of the things underscored in the motivation letter for the award is that René Andersen has played a central role in the Afghans having increasingly more trust in a brighter future for their nation.

- I am proud that we as Danish officers are fully at the same professional level as American colleagues. That said, we can still learn much from their experience: they have been involved in armed conflicts for a long time compared to us, Colonel René Andersen concludes.

Other international news on the Danish Defence: check out this excellent TV spot on CNN. Their reporter has been onboard the super modern, Danish frigatte Iver Huitfeldt.