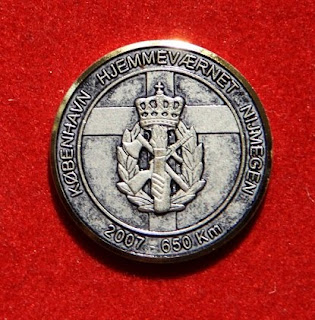 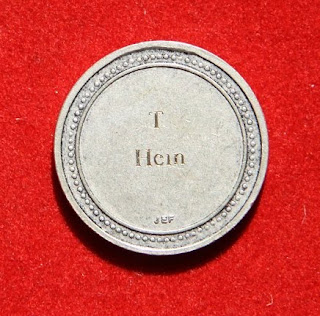 This year, we're at it again: marching from Copenhagen, Denmark, to Nijmegen, Holland. A stroll of 650 kilometres before resting about 1,5 day and then doing the regular Nijmegen Four Day Marches of 160 kilometres.

In the pictures you see the memorial coin we were awarded in 2007. I don't think you can find this elsewhere on the internet, but you're welcome, don't mention it. No official medal for the uniform, unfortunately, but not everything should be done for the bling-bling. Edit July 2017: Danes are now actually officially permissioned to wear this as a medal, but exclusively in the week partaking in the Nijmegen Marches. See here to check out picture of the ribbon (Danish language).

My personal training regime of 2012 will start on Saturday - the Beagle Boy way, namely by walking to watch a game of football in the outskirts of Copenhagen in the early afternoon. There will probably be some beer involved, but I'll just have to find a way to live with that (edit: a report in Danish here).