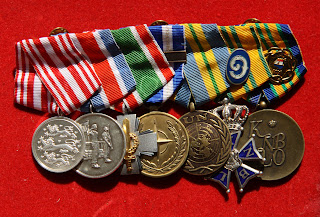 So this is how my official decorations look(ed - new Nijmegen medal now). For those not familar with the military code system, it should be plain here that the ribbon bar represents the medals. The ribbon can be worn in everyday duty, in case your wear a shirt (not on the combat uniform!). The medals themselves are only worn on special occasions, e.g. a parade under arms.

L to R:
- The Danish Defence Medal for International Service in Afghanistan. 2011

- Danish commemoration medal for the 1988 Nobel Peace Prize: it went to UN peacekeeping soldiers everywhere, and is handed out to Danes that have served in one or more UN missions. 2001

- Royal Dutch medal for orderly duties - the Nijmegen Four Day Marches. 2001
---- A special badge for the catastrophic year of 2006 is pinned to the ribbon. In 2006, the march was cancelled after day 1. During that day, two died, hundreds were committed to hospital, and about a third of the starters quit. The reason was a heatwave - and unfit people not drinking enough water. So I was cheated for a “real” number that year, but on the other hand, the 2006 pin is unique and will never be handed out again.
Indsendt af Hr. T.H. kl. 09:09