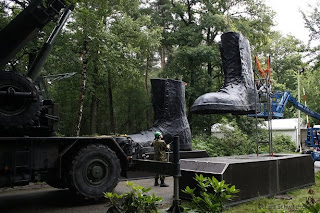 The Marches and Defence signs a new contract on July 17 for a period of 5 years. This is the survival of the military camp Heumensoord to 2017 guaranteed.

Defence cuts have sharply compared to other years. The contract is the result of intensive lobbying by the organization of the Marches at Defence.

Last year, both parties were uncertain about the future of military participation in the walking march. Defence has proposed to withdraw because of the significant cuts in the armed forces of the Netherlands. Unplug all forms of cooperation exercise.

The Marches is partly seen as an exercise and preparation for military operations. Thus, the pontoon bridge at Suburbs built by soldiers who thus gain experience, this year for the first time in cooperation with Belgian and German soldiers.

Rest Areas
Another part of the contract: several large resting places of the Marches are not furnished in pastures. In particular, the military medical posts in Wijchen Beuningen will now in big sports halls along the route to find and not in a meadow.

The original article in Dutch here.