NOW ALSO IN ENGLISH - while we wait for a report from Daniel and Andreas, who just did the march here in 2014. 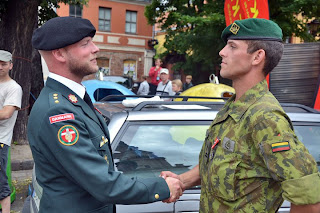 March well done. Sergeant Maksimas was a splendid chap to walk with, and hands had to be shaken on that. Many more pictures below.


During the weekend of 30 June till 3 July, 2011, a march of 2 times 100 kilometres was succesfully executed. The event was organised as first a 100 km within a time limit of 24 hours, then 24 hours of rest, and then another 100 clicks within another day. I travelled to Lithuania on my own and combined the walk with visiting friends from the latest deployment to Afghanistan. 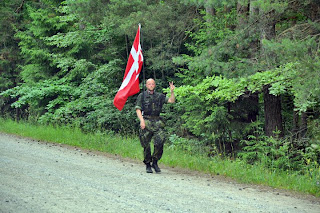 I bought a flag in Copenhagen Airport and a fishing rod in a Kaunas mall, et voila, a standard bearer right there. The only times it was out of my hands was during breaks.


It drew quite a bit of attention that I was a foreigner, since I was the only non-Lithuanian, except four, poor Latvian soldiers who completed destroyed their bodies by walking far too fast during the first day, and probably not having trained enough, either. Me, I honestly enjoyed the whole thing.

The route was beautiful. It was there and back again between Kaunus and Jurbarkas – two cities connected by a river. One day following the south river-side, the other day the north bank. Especially the second marching day was fantastic, with lots of woodland, a glittering river, and a couple of medieval castles where rest areas had been set up. 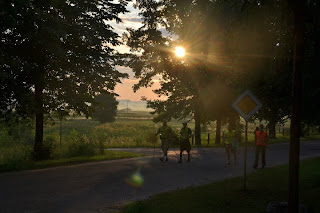 Sunrise. It was lovely with an event so close to summer solstice; night was soon over, that's good for morale. 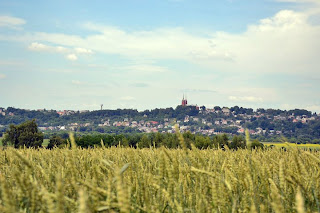 View across the river.


I got off with just one blister down in the semi-heavy military boots. It popped up it’s little head between 170 and 180 km, where the walking surface was rough. Very muddy path and low-hanging branches in the dusk making progress difficult for a flag bearer and my feet sliding around inside the boot. The blister was tiny, though, and it took me about 30 seconds all in all to have it fixed completely in my hotel room. Then I jumped into my shirt and tie uniform and got a lift back to the finish area: time for medal parade. 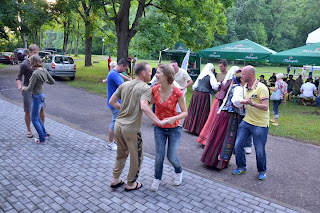 In the evening of the 24 hours of rest, I was singled out and dragged out to participate in Lithuanian folk dancing! Very entertaining.

As can be seen, I carried the Danish flag, Dannebrog, with me. Depicted below is a Danish businessman and me at a monument. John has lived in Lithuania for 16 years, and he took me by surprise: “Velkommen til Veliuona,” someone suddenly said when I arrived to that town; much gaiety was taking place at the central square rest area. My Lithuanian companion Max and I had done 140 km at that point.

It turned out that John was a former Royal Life Guards conscript, year of 1965, and sharing a background in the regiment, that was it: he invited Max (who also carried his national flag all the way) and me to his home nearby. We spent an hour with him and his wife in their house, or rather, I daresay, mansion by the river. Hot coffee, cold beer, a real toilet, and pleasant company were on the menu. An hour is a long time, especially since we had already taken our good time so far, making rests at interesting places, meeting people. When we finally took off again, we were far behind, but Max just phoned the organisers and assured them that we were OK and our way. 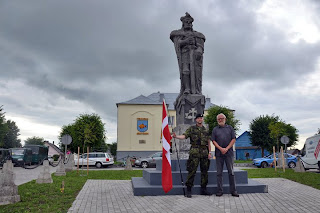 
Before we were so generously hosted by John and Bella, his wife, Max and I had made another excursion: the local church tower looked perfect for a photo with crossed flags out from the top window. Boy, there were many steps, but honestly, I think we revelled in having enough energy to do something stupid like that. Showboaters, really. 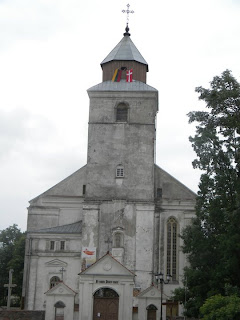 
All in all it was an unforgettable experience participating in this march. I had not trained much for it, and though admittedly I have a lot of experience with road walking, I was a bit anxious at the start line: was I about to enter blister hell, had I been too cocksure of myself? Luckily, it went fine. Not just because I sensibly didn’t force march rather than taking my good time at rest places, but also because of the whole set-up: a more friendly and forthcoming bunch than the organisers and the fellow walkers I have seldom chanced upon.
The 2x100 km eXtreme comes with my strong recommendation.

Below some more pictures.

Picture report fom 2x100 km eXtreme, Kaunas-Jurbarkas-Kaunas, 2011
Pictures taken by a number of new, Lithuanian friends and then stolen from Facebook by me 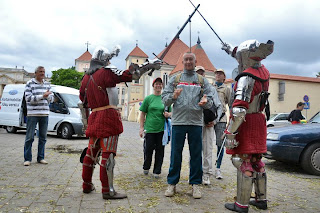 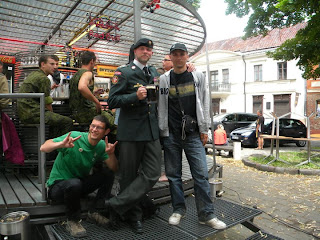 Quick trip to the hotel for S-S-S and then back to the main square in Kaunas. This young gentleman accompanied Max and I for the last stretch of the second day walk. At that time, he was awaiting reply as to whether he had been accepted at the Army Academy. He succeeded, he later wrote me, so many congrats to him. 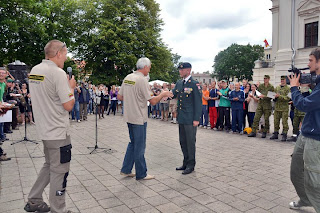 The generous hosts made a bit extra of a show when I was presented my medal. I was called out individually and got my (beautiful) medal and diploma by the president of the Baltic Walking Association himself. 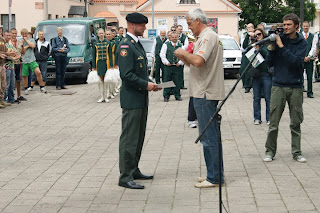 Medal about to be pinned on my chest. 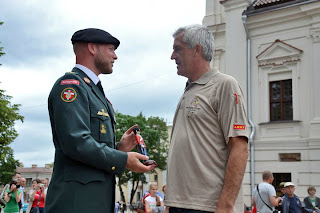 When the dust had settled after the parade, I presented my own gift to the president, Vidmantas Genys: a statuette of a Danish Royal Life Guardsman. Vidmantas, his wife, sons, and daughter-in-law were a driving force in making the great event real. Others laid down a lot of work as well, many thanks to all of you. 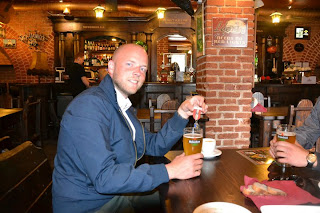 Lithuanian tradition: a new medal has to be inaugurated.. 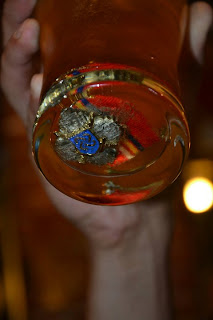 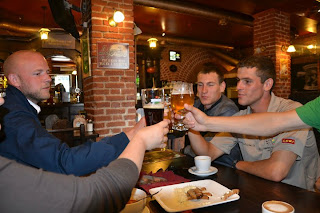 - so it's time for a well-deserved toast. 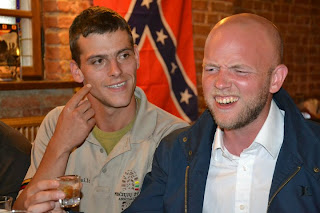 Just after having tasted a really, really horrible local drink. But down it went. 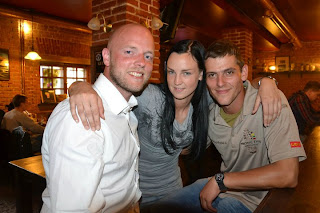 Good times with other walkers who still had plenty of energy to celebrate proper-like.. 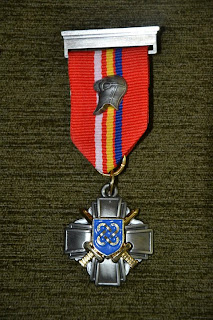 That's the medal. Designed by the official Lithuanian Heraldic Society. Lithuanian soldiers are entitled to wear it. Maybe that will be possible for Danes as well some day, but not as the rules are currently.
Indsendt af Hr. T.H. kl. 15:03